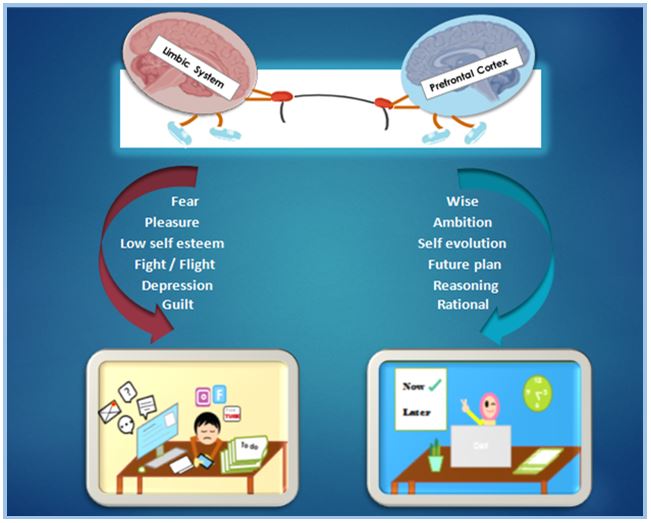 The biology behind Procrastination and possible solutions to curb the same………..

Procrastination is voluntarily delaying or putting off tasks until the last minute or at the end of the deadline despite knowing that it will lead to discomfort. It can be job-related work or daily chores like leaving the shopping to the last minute, planning to study the night before the exam, submitting a report at the deadline, etc. People consider procrastination due to laziness or just plain incompetence. Indeed, there’s much more science behind procrastination than you would expect! Most of us tend to procrastinate thinking that we will do it later or the next day and finally end up in getting nothing done on time. It’s an incredibly common human experience to put off the things and leave the stuff to the very last moment. Some people procrastinate because of not  knowing what to do, fear of failure, fear of being judged by others, perfectionism, etc.

And there is another group, the thrill-seekers! Who think that they work better under pressure, they just don’t start a task unless they get the pressure of approaching a deadline.

Now, lets see, why do we procrastinate?

What’s it that drives our mind to put off important stuff, despite knowing its consequences?

It’s just a simple thing – the wiring of our brain! In that case, there is something serious going inside our brain which prompts us to procrastinate.

Procrastination is the result of the constant battle between two parts of our brain, the limbic system and prefrontal cortex. In Sanskrit this terminology is called “Dwanda”

The limbic system is a group of structures in the brain that is located on both sides of the thalamus,  just beneath the cerebrum. It’s one of the well-developed and dominant parts of the brain which controls all our moods and emotions like fear, anxiety, anger, behavior. For example, when you accidentally place your hand near a cactus plant it is the limbic system that urges you to move your hand away from an unpleasant task.

The Prefrontal cortex is a part of the cerebral cortex which is less developed and weak. It is located right behind the forehead. The prefrontal cortex controls all our brain activities such as planning, decision making, problem-solving, self-controlling, etc. This is the part of the brain that eventually forces us to do our task. But this part does not function on its own, since it’s less developed and week; we need to put some effort to make it work.

At times we have to deal with many tasks, particularly when we have to go with difficult stuff; a tug of war will be constantly going on betwixt the limbic system and prefrontal cortex. The moment when you lose focus on that certain work,  limbic system takes over and you stop doing that important task which you have to finish and become more interested in preferring things that please you, like watching Netflix, scrolling Facebook, sleeping etc…and thus, procrastination kicks in!

When procrastination kicks in, a whole cascade of chemicals alter our brain chemistry. In such a case,our brain considers all the tasks as a threat. Amygdala is a section of the limbic system, controlling our survival mechanism our emotional behavior and motivation. In fact, amydgala scans our environment and helps us to coordinate the response to anything that threatens us. When it detects something unpleasant (in this case, the work in hand), the neurotransmitter norepinephrine takes over, thereby,  increasing the levels of anxiety and fear. Subsequently,, the hormone adrenaline gets pumped into the picture altering our physiology to make us emotionally to fight (resistant) or flight (ignore) the task.

Dopamine, on the other hand, is a feel-good neurotransmitter. It is released in pleasurable situations like watching movies, having food, etc. Human beings are addicted to dopamine. It stimulates our brain to seek out the pleasurable activity by actively neglecting other important stuff. That’s why you choose something else instead of doing something really important. This is the scientific explanation behind procrastination.

Consistent with recent researchers, there are some reasons for procrastination;

To a certain degree, it’s normal to procrastinate. You procrastinate about something because you are not sure that you’ve made the right decision and your mind tries to weigh up all the pros and cons and gather the necessary information to ensure your decision is right, rather than jumping into action without thinking properly. But chronic procrastination will result in a sense of guilt, crisis, stress, anxiety, and loss of personal productivity.

How can we stop procrastination?

There are several tips that you can use to avoid procrastination and start actively working on your task.

“Life would be less stressful if you handle things when they show up, instead of when they blow up!” (Mohammed Ali)

Written by: Ashaiba Asiamma. She is an ICMR Senior Research Fellow at Yenepoya Research Centre (YRC), Yenepoya (Deemed to be University), Mangalore. Her research area includes Medical Microbiology and Nanotechnology”.