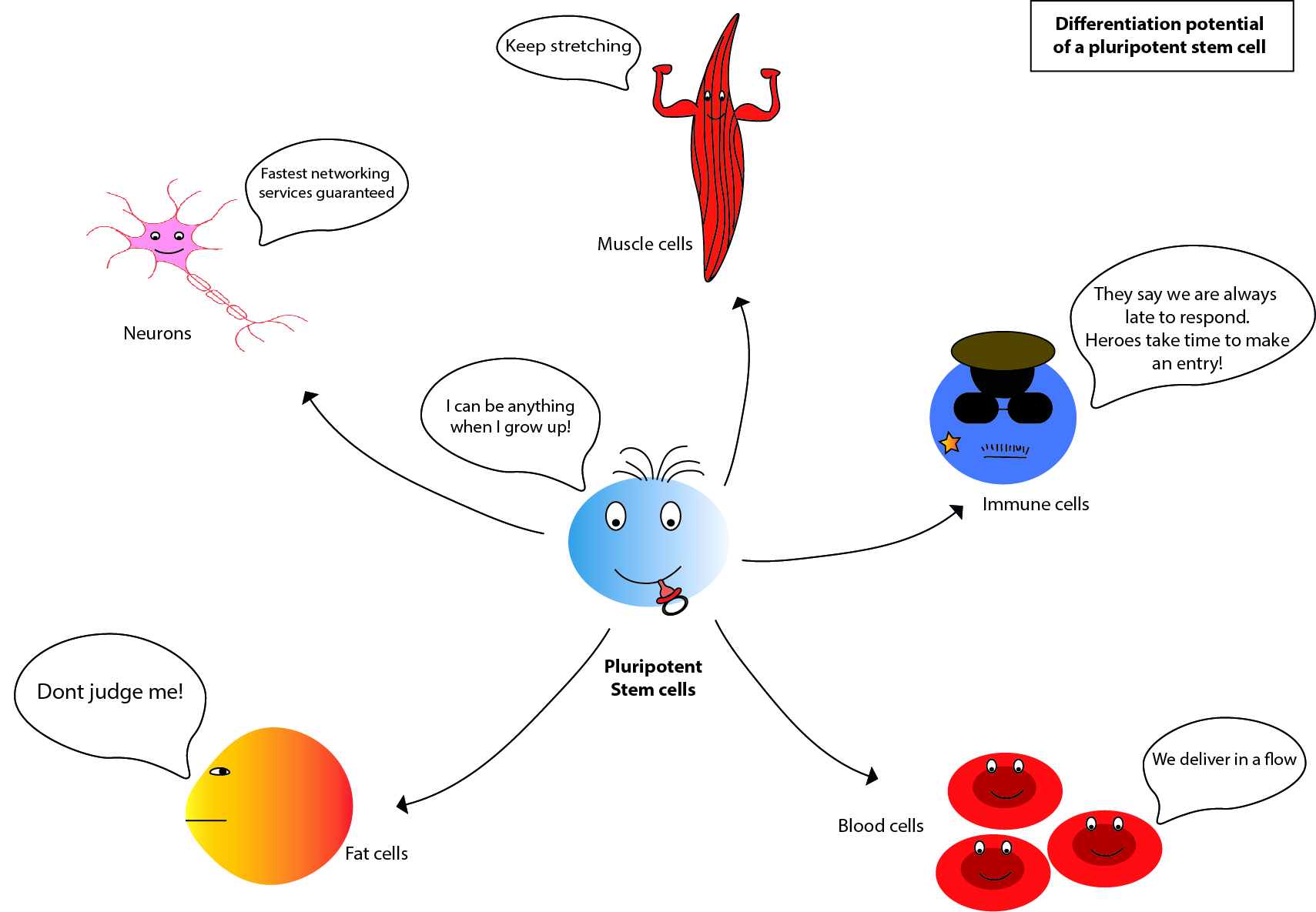 How to introduce stem cells to a layperson? If they are not up to date with the recent advances in science, they might think we are talking about plants. First usage of the word “stem cell” was seen in the literature dated back to 1868 in the works of evolutionary biologist Ernst Haeckel. He used the word “Stammzelle” to describe the unicellular ancestor from which all multicellular organisms have evolved according to his presumption. Not to go too deep into the history, let us focus on the matter at hand – what are stem cells?

To put it straight we can say – stem cells are babies! A baby has the potential to become whoever he wants to be when he grows up – a doctor, an engineer, a scientist, a techie, an entrepreneur, an artist, a movie star, a singer, or anyone. As he grows up, the choices he makes further narrows down this fate. For instance, choosing biological science over computer science or commerce for the higher secondary education and doing undergraduate courses in the preferred stream. Anyway, you get the picture. Just like a baby, stem cells can become whatever cell it wants when grown up (differentiated to be specific).

Now let us get a little technical. Stem cells are the cells which can self-renew (make identical copies of themselves) and differentiate into other cells types. During the early development, when the egg is fertilized, the cells thus formed are totipotent stem cells. Each cell can grow into a new individual, if separated. These cells can give rise to embryonic as well as extra embryonic structures. The first segregation of stem cell fate begins at blastulation – formation of blastula. In mammals, blastulation is the formation of a hollow sphere of cells with a fluid filled cavity and group of cells in one corner named inner cell mass. The totipotency is lost at this stage and the cells now become pluripotent. The cells in the inner cell mass of the blastula can give rise to all three germ layers (ectoderm, endoderm, and mesoderm) of the embryo proper but not the extraembryonic membranes. As the growth and differentiation progresses, the pluripotent stem cells become multipotent and limits the differentiation to fewer lineages. The mesenchymal stem cells present in adult tissues such as bone marrow, adipose tissue as well as the umbilical cord of the foetus and the haematopoietic stem cells present in bone marrow and peripheral circulation are multipotent. Further the progenitors of these multipotent stem cells are oligopotent. They can only give rise to fewer cell types. For instance, haematopoietic stem cells, which are multipotent, can differentiate into oligopotent myeloid or lymphoid progenitors. The myeloid progenitors can only differentiate into the blood cells (RBCs and WBCs) whereas the lymphoid progenitors can give rise to B cells, T cells and NK cells. Then there are unipotent stem cells, whose potency is limited to one lineage. Muscle stem cells or myosatellite cells are one of the examples for unipotent stem cells. They can only differentiate into skeletal muscle cells. Thus, the potency of stem cells varies depending on the site or stage at which they are isolated. As for the therapeutic research, the choice of stem cells depends on the abundance of the source and the feasibility of differentiating them into the cell type of interest.

What we discussed are the naturally occurring stem cells. Understanding the genetics of embryonic stem cells (ESCs) have made it possible to induce a differentiated cell of an adult body to become pluripotent. These induced pluripotent stem cells (iPSCs) were made by introducing four genes – Oct3/4, Sox2, Myc and Klf4, known as Yamanaka factors, to a differentiated cell such as a skin cell. Shinya Yamanaka discovered this for which he shared the Nobel Prize in Physiology or Medicine in 2012 with John B. Gurdon who had earlier proved in 1962 that specialisation of cells is reversible. These iPSCs are equivalent to ESCs in their properties and they do not cause any ethical issues that pertains in the isolation of ESCs from human embryos. Around the world scientists have created neurons, blood cells, egg and sperm precursors, liver cells, pancreatic beta islets, cardiomyocytes, bone precursors and a whole lot of cell types from iPSCs for the therapeutic research. Clinical trials are underway in using iPSCs for Parkinson’s disease, heart diseases, macular degeneration, spinal cord injury, diabetes, osteoarthritis, and the list keeps on increasing. The advent of iPSCs have revolutionized stem cell research by creating a new platform to study diseases and introduce patient specific regenerative therapies.

Having said that, we cannot just do stem cell therapy for anything everything like those quackery advertisements claim. There are strict regulations put forward by the health authorities. The Indian Council of Medical Research only permits the transplantation of haematopoietic stem cells from bone marrow and umbilical cord blood to treat cancers and different blood disorders. Therapies involving other stem cells or other diseases are still being researched and yet to be approved officially. Any other treatment or therapy violates the NGSCR 2017 (National Guidelines for Stem Cell Research) is considered unethical and a malpractice. Unproven stem cell treatments may have health benefits as they claim, but there are greater risks associated with it. The transplanted cells may not stay at the site in the body where we intent it to be and it might differentiate into some other cell type and multiply. Sometimes it may not work or worst case it will develop into a tumour. What we can do is wait for the day when all the clinical trials are done with and stem cell therapy for other diseases are approved by the authorities.

In case you are wondering if stem cells can be of any use in the fight against the SAR-CoV-2 virus and the COVID-19 disease – Yes, they can! Stem cells can help us learn a lot about the virus as well as heal the damage done by the virus. iPSCs can be used to create lung organoids to study how the virus infects the cell and find an effective way to fight it. The damages in the lungs and other organs of the COVID-19 patients can be healed with stem cells and the quality of life can be improved. As of now these, treatments can only be done under the strict guidelines of clinical trials. There are still a few challenges that to be tackled so that stem cells can reach full potential in therapeutic research. Immunogenicity and tumorigenicity are the major risks associated with the transplantation of stem cells and their derivatives. Researchers are still finding ways to improve the quality and safety of stem cells. Hopefully, within the next decade, we might find stem cell transplantation facilities in most of our hospitals.