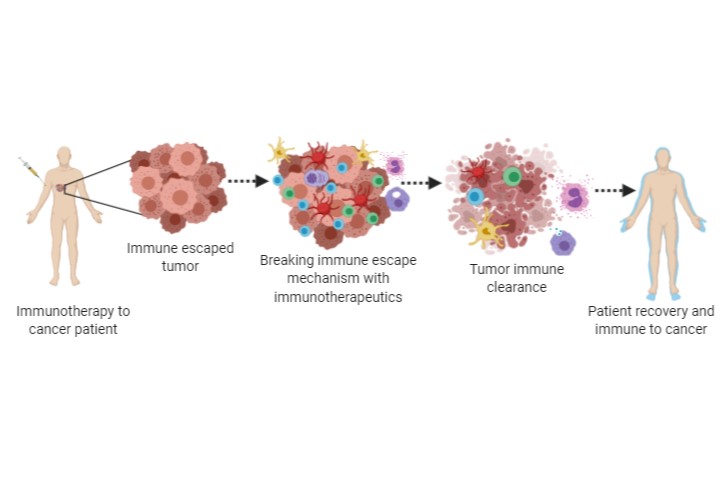 Diagnostic and therapeutic advancements are among the key factors in improving the quality of living. An advanced health care system is a cardinal scale for measuring the development of a country. Till date, the discovery of vaccines is one of the most remarkable advancements in modern medicine. Vaccines enabled humans to eradicate some of the most life-threatening diseases. Rather than finding an external agent to kill the pathogen, the immune system is trained to fight off the pathogens. The diverse and complex nature of the immune system, remarkable specificity and an efficient regulatory system makes it a powerful target for the development of modern therapeutics.

The Nobel Prize in Physiology or Medicine, 2018 was jointly awarded to Dr. James P. Allison and Dr. Tasuku Honjo for the discovery of immune checkpoint molecule CTLA4 and PD1, which act as a molecular brake in anticancer immune response. But the concept of targeting the immune system to treat cancer is not a new idea. In the late 1800s, a physician Dr. William B. Coley observed that patients with cancer underwent spontaneous remission after erysipelas development. Upon injecting mixtures of live and inactivated Streptococcus pyogenes and Serratia marcescens into patients’ tumors Dr. Coley observed a complete durable remission in several types of malignancies. Lack of known mechanisms about how the cancers were affected by such infection and ethical issues related to deliberately infecting patients with potential bacteria hindered the adoption of this strategy over surgery and radiotherapy. After a century, the Bacille Calmette-Guerin (BCG) was tested for preventing the recurrence of nonmuscle-invasive bladder cancer. The successful trials led to worldwide usage of BCG as a preventive therapy against several cancers.

The original concept underlining cancer immunotherapy was proposed by Thomas and Burnet in 1957. The immune cells function as a surveillance system to find mutated, abnormal cells, or cancer cells. Lack of scientific evidence to support the theory due to the inability to culture immune cells impeded the field of cancer research until the T cell growth factor Interleukin-2 (IL-2) was identified in 1976. Ability to culture immune cells using IL-2 led to the understanding of immune surveillance capability and cancer-killing action of T cells. Effectiveness of large quantities of IL-2 in patients with metastatic cancers led to the expansion of lymphocytes and increased the survival of patients. IL-2 as an immunotherapeutic was eventually granted FDA approval for treating metastatic kidney cancer in 1991 and against metastatic melanoma in 1998. In 1984 Dr. Niels K. Jerne, Dr. Georges J.F. Kohler and Dr. Cesar Milstein were awarded the Nobel Prize for Physiology and Medicine for the theories concerning the specificity in development and control of the immune system and generation of monoclonal antibodies. Research on antibody-based therapeutics opened a new arena for targeted therapies. The development of the first monoclonal antibody Rituximab approved by FDA for the treatment of non-Hodgkin’s lymphoma in 1997. Rituximab antibody binds to CD20 receptors on immature B cells and eventually induces elimination by natural killer (NK) cells.

The concept of cancer vaccine emerged after the identification of tumor antigens. Even though the cancer cells contain the same genetic material like normal cells, the adapted mutations, alteration of the protein expression and change in cellular metabolism differentiate them from the normal cells. Such alterations generate tumor antigens which can be used to target cancer and also develop a vaccine approach to treat efficiently and prevent any chance of relapse. In 1991 researchers cloned a melanoma derived antigen that was successful in generating an anticancer response from cytotoxic T cells. In recent years the tumor antigen-based anticancer immunotherapies have evolved. The development of antigen-activated allogenic and autologous T cells has shown promising responses in both, laboratory studies and clinical trials. The process of mass expansion of T cells, dendritic cells and NK cells collected from patients or healthy donors and their expansion into target tumor cells using specific antigens are the current cell-based vaccine approaches. The development of genetically modified Chimeric antigen receptor T cells (CAR T cells) has shown significant responses against various cancers. Currently, multiple CAR T cell therapies have been approved by FDA for the treating various types of leukemia. Identification of immune checkpoint inhibitory molecules CTLA4, PD1 and its ligand PDL1 are a potential target anticancer therapy. Ipilimumab an antibody targeted against CTLA-4 is approved by FDA for use in melanoma patients. Antibodies that inhibit PD1 and PDL1 are currently in phase III clinical trials and reportedly showing a promising response.

Even though immunotherapies are promising and efficient in providing long-term protection from cancer relapse, the humongous costs involved for the treatment make it unaffordable for major affected populations. Many undergoing studies are refurbishing conventional therapies such as chemotherapy, radiotherapy and modern advancements such as photodynamic therapy, radiofrequency hyperthermia, etc. along with immunotherapeutic methods will hopefully lower the costs. The potential of the immune system, diversity of different immune subpopulations heterogeneity of patient groups is opening up a modern era for research to fight cancer. The major challenge in treating solid tumors is the harsh tumor microenvironment, which enables the rapid evolution of cancer cells to develop therapy resistance and immune escape. Identifying the potential modulators of immune microenvironments in various cancers and targeting such mechanisms to reactivate the immune surveillance is possibly what lies ahead for cancer therapy.