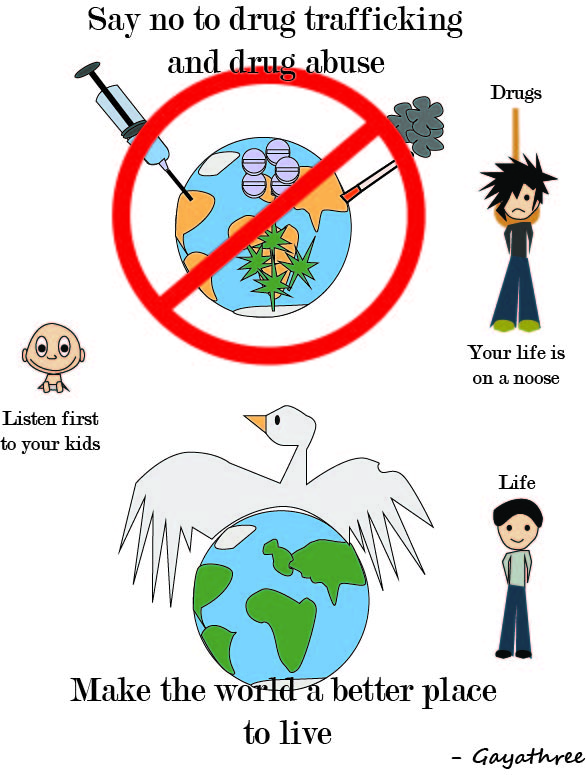 Listen-First and Say NO to Drugs

Drug trafficking and abuse are so real, it is lurking very close to you with a moment of carelessness, it will latch itself onto your life or that of your loved ones!

Abuse, the very term initiates widened idea of thoughts however, pertaining to physical, mental and sexual abuse. Most of us have failed to acknowledge another form of abuse, drug or substance abuse which might primarily be due to our ignorance or failing to acknowledge the existence of it. For years, many countries with help of their government and other local and world-level organizations have been staging a mighty war to eradicate drug trafficking and abuse. We often relate drug abuse to health-related problems but, the most important burden that it projects on the society is the economic burden, including law and order issues too. This clearly necessitates a special focus and reaching out to the common people extrapolating the various forms of threats that drug trafficking and abuse poses. To spread awareness, each year the international day against drug usage and trafficking has been observed on the 26th of June, an initiative started by the United Nations Office of Drug and Crime (UNODC) since 1987. A new theme is observed every year and “Listen First” is the theme for 2018, as a minute step towards a greater good. The initiative focuses on listening to the children and the youth, the main targets for drug dealers and thereby to be abused. This is framed to ensure better parenting and help the youngster to grow safe.

According to the UNODC report, about 1.9 lakh people lose their lives to substance abuse and its ill-effect doesn’t stop there. This serious issue has also been ruining the life of living, breaking hell into their lives before they meet their untimely ultimatum. Transmission of HIV, hepatitis and tuberculosis have found the easier way through sharing of needles and other tools used for intake of the drug. As per the report by the UNODC, drug trafficking on the other hand owns up to money laundering in billions across international boundaries, alteration of the socioeconomic structures, organized crimes, insurgency and terrorism. The UNDOC report, 2017 mainly focussed on the influence of money laundering into support of terrorism. Looking at the drug abuse status in India, about 7.21 crore people have been estimated to be drug addicts, a report that dates back to 2001. Since then, no follow up on the statistics have ever been made, which makes us rethink on the strategy to be employed to reach out to the common man, explaining the seriousness of the issue and getting out data straight to the current era.

Usage of drugs is termed an abuse due to the effects it has on the brain. These drugs interfere with the neuronal communication (by activating or suppressing them), alter release of neurotransmitters (chemicals that send signals) and the reception of these chemicals by the subsequent neurons. The drugs can influence a neuron by activation/suppression due to its chemical similarity with the neurotransmitter. Although these drugs share a good structural similarity with the natural neurotransmitters, the effects produced by them differ largely from that of the neurotransmitters. Marijuana and heroin are drugs that activate the neurons while amphetamine and cocaine stimulate the neurons to secrete neurotransmitters, this way each drug/substance has its own effects on the brain. Excessive and continuous usage of drugs makes one addictive which, is a resultant of the pleasure it gives to one’s senses or thoughts, in other ways the brain’s reward system and perception. Once the drug effect vanes off, the person can no longer feel better as the neuronal communication falls back to normalcy. To bring back the significant pleasure one gets addicted and depended on the drugs. Due to the rewarding (pleasurable) feeling these drugs offer, a person is inclined to experience it over and over thereby, creating a vicious cycle of drug intake. The reward system is primarily controlled by the neurotransmitter dopamine, which is released at a heightened intensity and efficiency with amphetamine usage. Numerous studies have been carried out to understand the influence of drugs on an individual’s mental, physical and social health and, brain development. The findings suggest the impairment of brain development and behaviour. Among children, those with attention-deficit hyperactivity disorder are more prone towards eventual intake of drugs, as showcased by a 15 year follow up study. This sheds light on the children’s welfare, the environment they are brought-up and the help they need from parents or guardians to help them grow in a safe environment. The “Listen First” theme is thus imperative to strengthen the children to give a better tomorrow and thereby one-day, a society free of drug trafficking and abuse.

A lot of references and reports can be spread along in making one understand the importance of saying no to drugs and their trafficking. All that matters is to reach out to everyone we know, a small by-word awareness might be enough to save at least one person from falling into the deep pits of immeasurable suffering. We also have an obligation to our society and help the ones in need, the ones that are in the verge of taking a dive at the deep hell (of drugs) and to rescue the ones already drowning in it. Rehabilitation centres, psychological counselling, helping people battle depression etc. can help in sculpting the society for greater good.

Light the fire in you, towards life, not the drugs that shrink to a minuscule of nothing.

Say no to drug abuse and illicit drug trafficking.

Gayathree K. is a research scholar at Center for Systems Biology and Molecular Medicine, Yenepoya Research Centre. She is working on proteomics and metabolomics analysis of neurodegenerative disorders.

3 Replies to “Listen-First and Say NO to Drugs”